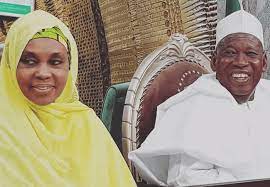 Touchaheart Nigeria reports that first lady of Kano State, Hafsat Umar Ganduje, has regained freedom after allegedly quizzed for over five hours by the Economic and Financial Crime Commission (EFCC).

Dr. Hafsat Ganduje, who was summoned to the EFCC headquarters in Abuja on Sunday, was interrogated for hours over her alleged involvement in a land scam.

Hafsat had earlier ignored the EFCC’s invitation following the petition filed against by her first son, Abdulzeez Ganduje.

Under the influence of her husband, the governor’s wife was issued an administrative bill for alleged illegal hijacking of land property worth billions of naira.

Governor Ganduje, who accompanied his wife to the EFCC headquarters, was said to have influenced her release on Tuesday morning.

The Governor and his wife arrived in Kano on Tuesday morning via Mallam Aminu Kano International Airport.

Abdulzeez had dragged his mother Hafsat Ganduje to the EFCC, over a property which he claimed the mother used her access to power to enrich herself.

Dressed in a native attire, the governor’s wife was accompanied by one of her aides.

Meanwhile, allegations of the first lady’s detention have been refuted by the Kano state administration.

In a statement, the commissioner for information, Malam Muhammad Garba, said the reports of the arrest were unfounded.

He said the stories could not be attributed to any credible source.

“The Kano state government has dispelled as mere rumours being peddled by mischief makers that wife to the governor, Prof. Hafsat Ganduje has been arrested by the Economic and Financial Crimes Commission (EFCC).”

“The commissioner for information, Malam Muhammad Garba expressed regrets that the content of the unfounded story could not be attributed to any credible source such as the purported arresting agency, the EFCC.

“He pointed out that most unfortunately, the fake story is being peddled on social media platforms without confirmation from either the government or the EFCC

“The commissioner called on the good people of Kano state to disregard the rumour and also remain calm.”