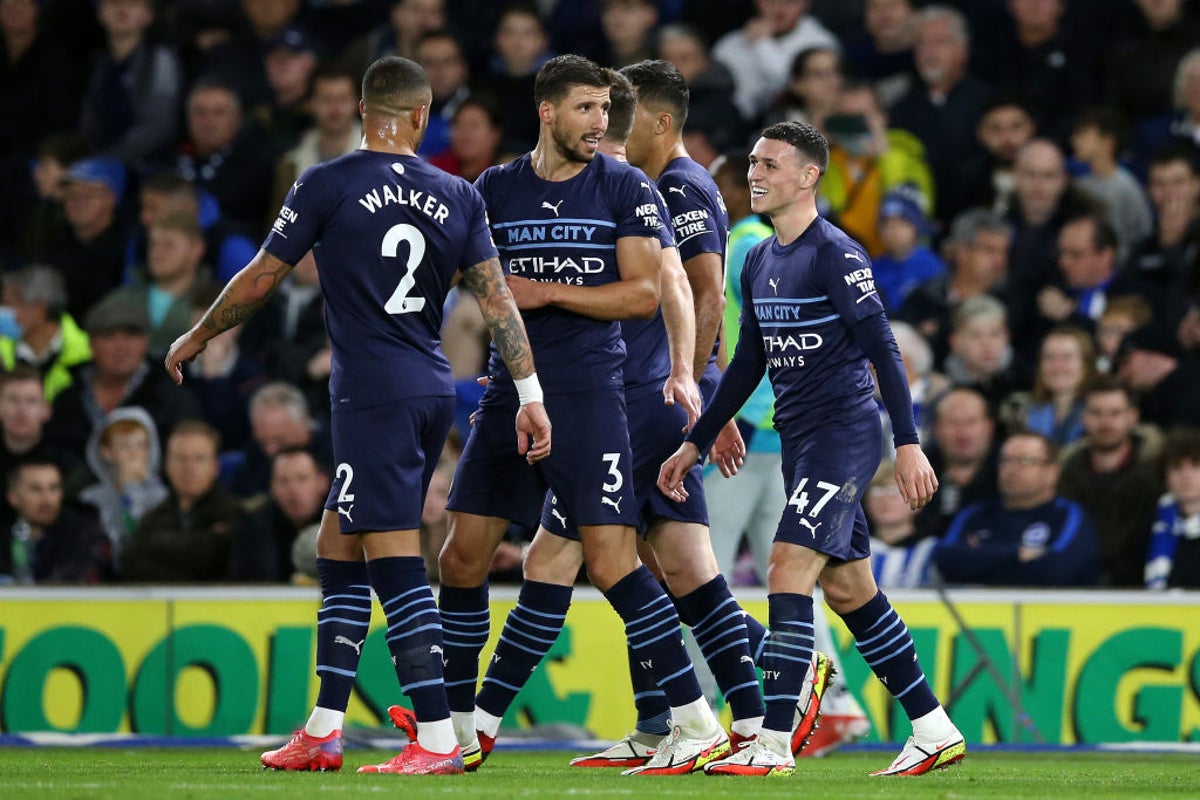 Touchaheart Nigeria reports that on Saturday evening in the Premier League, Brighton will face Manchester City, a meeting of two top-four clubs, one more unexpected than the other at this point.

The Seagulls have impressed thus far in the league, losing only once, but they have a difficult assignment in keeping the reigning champions at bay. Pep Guardiola’s team is in third place, just ahead of their hosts, and has the joint-best defensive record in the Premier League at this point.

City were in Champions League play this midweek, and produced one of their best European performances of the manager’s tenure, hammering Club Brugge and scoring five goals in the process.

Prior to that, they had an easy win over Burnley in the league last week, extending their unbeaten run in that competition to seven games since the start of the season.

Last season, the two managers had a spat, but Graham Potter says he apologized and doesn’t anticipate it to be an issue when they meet again, hoping for a “cuddle” from his counterpart.

Below are all of the live updates and action from Brighton’s match vs Manchester City:

Phil Foden spoke to Sky Sports after the game about his goals and playing in a newforward role for the champions. He said:

I thought from the start we looked very good in possession and controlled the game.

“Sometimes when you are 3-0 up you drop your level a bit. We are a bit disappointed with the second half but we dug in and only conceded one which is good.

“I’m enjoying it, I can drop deep and get the ball and pick the passes off. It’s a new role for me and I can say I’m really enjoying it. It changes it game to game. Sometimes I stay higher than normal, but this game they went man-to-man so I dropped a bit deeper and I thought we used the extra man well.

“We are on a good run of form, but we just want to keep going now for the next games and keep that level. On another day I could have scored three, but the main thing is the result and I’m just happy we got it today.”

The reigning champions were untouchable for 45 minutes as Phil Foden scored twice after the recalled Ilkay Gundogan had opened the scoring.

Touchaheart reports that Brighton were much better after the interval and arguably deserved more than the consolation given to them from the penalty spot by Alexis Mac Allister, with Riyad Mahrez striking late on as City left the south coast with a 4-1 win.

The Seagulls responded in the second half but were swept aside 4-1 by the Premier League champions.

Brighton vs. Man City: Five things we learned as Phil Foden stars in another big win for Pep Guardiola
Manchester City put in an exemplary performance on the south coast to beat Brighton and Hove Albion 4-1 and go second in the Premier League table.

The Citizens leapfrogged Liverpool thanks to a display full of creativity in attack, precision in their passing and composure all over the pitch. The visitors started quickly and their inventiveness led to three first-half goals which killed the game before Brighton knew what had hit them.

Brighton conceded as many goals today as they had in their previous seven Premier League games combined.

They let in four goals for the first time in 43 Premier League games, since a 4-2 loss against Everton in October 2020.

That win means Manchester City move ahead of Liverpool and into second place. They’re two points behind leaders Chelsea but Liverpool have the chance to overtake them when they face Manchester United tomorrow.

Brighton remain fourth but with United, Tottenham and West Ham all playing tomorrow they may drop out of the top four but the end of the weekend.

90+6 mins: An impressive performance from Manchester City moves them up to second in the table just two points behind leaders Chelsea. Phil Foden was the star of the day but Brighton aquitted themselves well in the second half after a shocking first 45 minutes.

90+5 mins: Icing on the cake! Brighton fail to deal with a cross and the ball comes to Fernandinho on the edge of the box. He slots it to Foden who sets up Mahrez arriving from the right. Mahrez takes a touch to control the ball and then sweeps it past Sanchez to give City a fourth.

90+3 mins: Foden is denied again but this time by Veltman. City win a corner and Foden knocks it short to De Bruyne. He works it back to Fernandinho who gives it to Rodri. City are in no rush to work the ball forward now. They’re happy to keep possession.

90 minutes: An extra five minutes to play. Since De Bruyne’s introduction, Foden has regained his mojo. Sanchez has come to Brighton’s rescue a few of times when the midfielder has played him into the box. Foden needs one more goal to complete his hat-trick.

87 minutes: Riyad Mahrez replaces Gabriel Jesus, who is encouraged by the referee to rush off the pitch. With the way City is attempting to squander time, you’d think they had a two-goal lead.