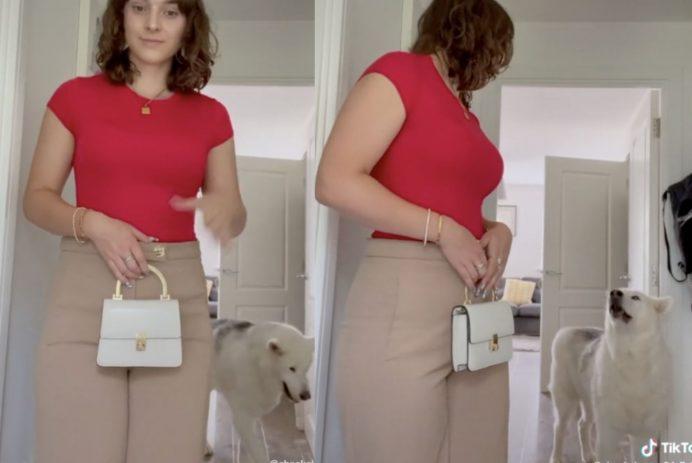 See how a woman is stunned after a dog appears to ask her a question in English.

‘I’m pretty sure that was a compliment,’ says the speaker.

After it may have murmured a few phrases in English, a woman’s dog became viral.

Touchaheart Nigeria reports that for hundreds of years, dogs and humans have been companions. It’s no surprise that dogs have figured out how to read human speech, tone, and body language.

When we speak to a dog, however, it is rare — if not impossible — for it to respond in our language.

While dogs lack the basic components and capacity for human speech, a popular video may have some people doubting their assumptions.

When her Alaskan malamute dog appeared to ask her a question, a TikToker was utterly taken aback.

“I was just trying to see if my outfit was cute,” she explained in the caption.

The woman posed for the camera, checking herself out from multiple angles.

Then her dog entered the room. It looked up at her and, out of nowhere, it said,

“Where you going?” The animal seemed to use the proper inflection, and its gift for elocution surprised even the pet owner.

The video received over 10.8 million views on TikTok.

“I’m pretty sure that was a compliment,” another wrote.

“LMAO. The way he is standing and staring in the beginning,” someone added.

In this article:Alaskan malamute, body language, Dog, Dog Speaks English, Dog speaks English to its owner, English, murmured a few phrases in English, read human speech, See How Dog Leaves Woman Shocked As He Speaks To Her In English, The animal, The woman, TikTok, tone, Video, Where Are You Going