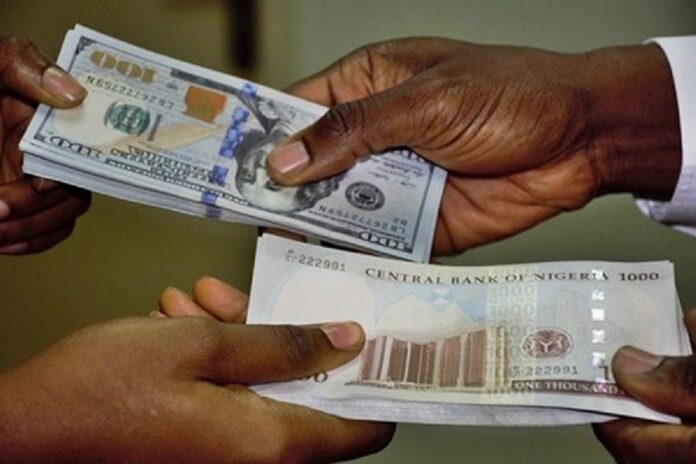 Naira Weakens At Official Market Despite 122% Rise In Dollar Supply

According to reports monitored by Touchaheart Nigeria on Nairametrics stated that on Tuesday, 26th October 2021:  The exchange rate between the naira and the US dollar closed at N415.10/$1 at the Investors and Exporters window, where forex is traded officially.

Meanwhile, the naira remained stable against the US dollar on Tuesday at the parallel market to close at N570/$1, representing the same rate when compared to the N570/$1 that was recorded as of the close of trading activities on Monday, 25th October 2021. This is according to information obtained by Nairametrics from BDC operators in Lagos.

The local currency weakened at the official market despite a 122% significant rise in dollar supply as forex market volatility persists.

The CBN at the unveiling of its digital currency, eNaira, launched an initiative to help address the foreign exchange crisis. The apex bank announced the introduction of a financial instrument that would support 100 companies every 100 days in order to boost production and stave off importation responsible for Nigeria’s forex crisis.

Trading at the official NAFEX window

The opening indicative rate closed at N414.04/$1 on Tuesday, representing a 1 kobo gain when compared to N414.05/$1 recorded in the previous trading day.

According to data tracked by Nairametrics from FMDQ, forex turnover at the I&E window increased from $90.36 million recorded on Monday to $200.74 million on Tuesday 26th October 2021.

The world’s largest and most popular cryptocurrency, Bitcoin, was down by 1.84% on Tuesday evening to trade at $61,377.77 as extreme bullish sentiment appears to be cooling.

The bitcoin Fear & Greed Index is starting to decline from its highest level in more than seven months, which suggests buyers are starting to take some profits after a nearly 45% rise in BTC’s price over the past month.

Bitcoin had touched a record high of $67,139 last week, following the launch of the first Bitcoin futures exchange-traded fund (ETF) at the New York Stock Exchange.

Meanwhile, the global crypto market cap was soaring at $2.63 trillion on Tuesday, representing an increase of 1.16% over the last 24 hours, data available at CoinMarketCap showed. .

The total volume of the crypto market over the last day stood at $99.69 billion, which pointed out that there was a decrease of 4.67% over the course of the last 24 hours.

The oil price fluctuation continued on Tuesday after an industry-funded report showed a stockpile decline at the Cushing, Oklahoma, storage hub, with supply level already at the lowest since 2018.

Brent crude was down by 0.50% on Tuesday evening to trade for $85.97 per barrel after rising earlier in the day as Cushing crude draw worries the oil market.

The American Petroleum Institute (API) on Tuesday reported its fifth straight week of crude oil inventory builds. This week, the API estimated the inventory build for crude oil to be 2.318 million barrels. But a persistent draw in Cushing inventory is causing a bit of a stir.

U.S. crude inventories are still 61 million barrels below where they were at the beginning of the year.

Analyst expectations for the week were for a build of 1.650-million barrels for the week. In the previous week, the API reported a surprise build in oil inventories of 3.294-million barrels, compared to the 2.233-million-barrel build that analysts had predicted.

Nigeria’s foreign reserve gained $481 million on Monday, 25th October 2021 to close at $41.598 billion compared to $41.117 billion recorded as of the previous day. The latest increase represents a 1.17% increase in the country’s foreign reserve position.

The nation’s foreign reserve has gained $4.82 billion so far in October, on the back of the $4 billion raised by the federal government from the issuance of Eurobond in the international debt market. The gains recorded so far in the month is higher than the $2.76 billion gain recorded in the month of September 2021, while the recent increase puts the year-to-date gain at approximately $6.23 billion.