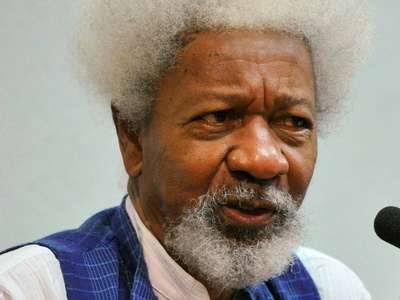 Prof Wole Soyinka, a Nobel laureate, said he was denied boarding at Charles de Gaulle Airport in Paris, France, on Thursday because he did not have ‘permission to go’ to Nigeria, according to airline officials.

Touchaheart Nigeria reports that during an engagement with journalists in Lagos, Wole Soyinka touched on the topic of “COVID, technology, and citizen expulsion.”

Even though no attempt was made to expel him, the author stated he felt as though he was serving a decree of expulsion for the 48 hours that the event lasted.

Every inbound traveler is required to upload their COVID results to a Federal Government-created portal, along with their personal information such as passport and ticket numbers. A barcode is generated after the exercise, signifying that the user has been granted permission to travel.

“Of course, there is something called as force majeure that means you can’t help it,” the writer who bemoaned his ordeal stated. Yes, we understand if there are floods or turbulence and your plane is unable to land and is diverted to another location.”

Wole Soyinka went on to say that when someone is “prevented from entering his nation due to the faults of others,” there is a problem.

“I had my immunization, I took the 72-hour COVID test, and I was negative,” the senior citizen said, recounting two incidents.

But there was reportedly one more, a new one is known as PCR (Polymerase Chain Reaction), which the Nigerian government had begun to demand at the time, I was out of the country.

This was news to me. I felt I’d prepared myself adequately. I was unable to board that plane. I needed to return to Paris. After taking the test and receiving my results, I stayed in Paris for three more days before returning to the airport.

“However, it happened for the second time only a week ago. I got my PCR this time, but I was still vaccinated. Of course, it wasn’t only me that spent the night at the airport; there were other Nigerians there as well.

They were unable to exit the airport because they had previously cleared immigration. They were, however, turned back at the gate.

It wasn’t PCR or whatever it’s called this time. It was because they had not gotten a travel permit from a place called the Nigerian Travel Porter. It was my turn once more.

I stated that I have everything, including the PCR. But they refused, claiming that the Nigerian authorities now required one more item. As a result, I had to return to Paris.

Then I was told to go to a machine and pay the required cash, and then permission would be granted by Nigeria, allowing me to return to my own country.

I rebooted and was back at Air France the next morning. We attempted to board this portal at the hotel but were unsuccessful.

Wole Soyinka went on to say that by 10 a.m., he realized he was going to miss his flight again, so he informed Air France of his situation.

“We kept working together with Air France staff between 10 a.m. and 2 p.m.,” Wole Soyinka said.

They brought their computers, and several of them changed my password for me so that they could try it on their machines, but they were unsuccessful.

Around midnight, we were able to get the payment of my credit card acknowledged. However, the permit to enter Nigeria, which contains a square barcode, was not generated.

The procedure is very astonishing in and of itself. That questionnaire was not designed by the Ministry of Health, in my opinion. It has to be the Ministry of Internal Affairs, I believe. After the first couple of questions, I invite you, everyone, to try to get on that site and tell me what it has to do with COVID.

I’m not sure what the majority of those inquiries have to do with COVID. I inquired whether there were any alternative flights to West African countries that didn’t require this kind of secret service questioning because that’s exactly what I thought it was.

They also stated that a flight to Lome will depart at 4.30 p.m. They should put me on it, I urged them. Boarding commenced at 2.40 p.m., and I was carrying my luggage to Lome. One of the supervisors had returned from the office in the meantime.

She was frantically working on the phones when she let out a breath of relief and dashed over to where I was standing with my bags.

Wole Soyinka went on to say that he didn’t believe that other people were barred from entering their country in the same way that Nigerians were.

“This is an appeal to the Ministry of Health, Internal Affairs, which I am confident must have participated in this form, to figure out what’s going on and why one should be subjected to this experience,” Wole Soyinka continued.

“Stop treating Nigerians like criminals and illegal immigrants who sleep on couches or the airport floor.”

In response to the Indigenous Peoples of Biafra’s call for a one-week sit-in ahead of November 6, 2021, Anambra governorship election, Wole Soyinka said,

“We’re in a mess.” This country is in a state of disarray. It’s disintegrating right in front of our eyes. The government is in shambles.”