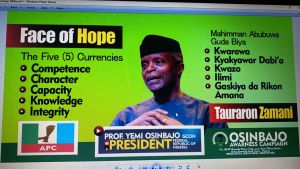 2023 Elections: The campaign posters of Yemi Osinbajo Is Everywhere in Benue

Touchaheart Nigeria reports that Vice President Yemi Osinbajo’s presidential campaign posters have taken over the streets and corners of Makurdi, the Benue State capital, ahead of the 2023 general elections.

Correspondent who went round the town observed that the posters which were positioned in strategic locations carries the inscription; ‘Osinbajo For All, 2023’ courtesy of the Osibanjo Volunteers Group (OVG) Màkurdi branch.

In an interview with the group’s Benue State coordinator, Ahule John Iorhemba, and the state secretary, Joe Akpode, they said the vice president, nor any of his relatives or staff, had any involvement in the organization’s formation or operation because it is entirely operated by volunteers.

“However, whether Prof. Osinbajo has shown interest to run for 2023 Presidency or not, the Osinbanjo For All Volunteer Group remains firmly committed to its stance because he has all it takes to move Nigeria in its place when given the opportunity.

“Osinbajo For Volunteer Group (OVG) is one of the major supporting groups rooting for possible emergence of Vice President Yemi Osinbajo as the flag bearer of the All Progressives Congress (APC) ahead the 2023 election and has restated its commitment to the course.

“Our group which has membership across various geo-political zones both young and old, is committed to ensure that Osinbajo emerges the APC flag bearer for the 2023 general election and is also elected as the president.

“Let it be on record that Prof Yemi Osinbajo didn’t mandate us to do this. He didn’t authorize us to mobilise for him. We are young and old men and women who strongly believe in his capacity. It is in him we think we can entrust our future. So, not withstanding his stand for now, in respect to 2023, we shall continue to promote him, we shall continue to let the world know those qualities we have seen in him that have attracted us.

“Considering our reach and spread we therefore join our national coordinator, Comr. Ogundeji Peter, the exco with other state coordinators and members on the field across the country to continue to promote the ideas and ideals that our principal Vice President Osinbajo stands for,” they said.