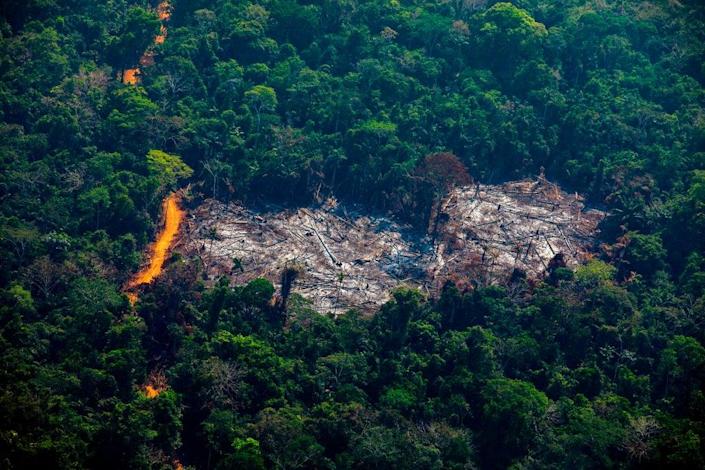 COP26: Leaders from around the World Pledge to halt Deforestation by 2030

In the first significant agreement reached at the COP26 climate summit, more than 100 world leaders will commit to ending and reversing deforestation by 2030.

On Tuesday, Brazil will be one of the signatories, as significant swaths of the Amazon rainforest have been logged.

Almost £14 billion ($19.2 billion) in public and private contributions are included in the offer.

Experts applauded the initiative, but cautioned that a prior agreement in 2014 “failed to curb deforestation at all,” and that promises must be kept.

Cutting down trees contributes to climate change by depleting forests, which absorb a large quantity of CO2.

If climate change is to be controlled, the two-week conference in Glasgow is viewed as critical.

Canada, Brazil, Russia, and Indonesia are among the countries that have said they will join the promise, which covers around 85 percent of the world’s forests.

Some of the money will go to poor countries to help with land restoration, wildfire suppression, and indigenous community support.

Deforestation will also be eliminated from the global trade of food and other agricultural products such as palm oil, soya, and cocoa, according to the governments of 28 nations.

These industries contribute to forest loss by chopping down trees to make room for livestock or crops.

More than 30 of the world’s largest corporations have pledged to stop investing in deforestation-related operations.

In addition, a £1.1 billion fund will be formed to conserve the Congo Basin’s tropical rainforest, which is the world’s second largest.

UK Prime Minister Boris Johnson, who is hosting the global meeting in Glasgow, will call it a “landmark agreement to protect and restore the earth’s forests”.

“These great teeming ecosystems – these cathedrals of nature – are the lungs of our planet,” he is expected to tell the event.

“It is good news to have a political commitment to end deforestation from so many countries, and significant funding to move forward on that journey.”

But he told the BBC the world “has been here before” with a declaration in 2014 in New York “which failed to slow deforestation at all”.

He also noted that the new agreement does not address rising demand for items such as meat grown on rainforest land, which would need addressing high levels of meat consumption in nations such as the United States and the United Kingdom.

“This deal involves more countries, more players and more money. But the devil is in the detail which we still need to see.

“This is a really important step at COP26. This meeting is around increasing the level of ambition and keeping global temperature rises below 1.5C – this is a big building block,”

Tuntiak Katan of the Amazon Basin Coordination of Indigenous People hailed the agreement, telling the BBC that indigenous communities were in the forefront of halting deforestation.

Mr Katan, an indigenous Shuar from Ecuador, claims that indigenous people around the world conserve 80% of the world’s biodiversity, but they endure threats and murder.

“For years we have protected our way of life and that has protected ecosystems and forests. Without us, no money or policy can stop climate change,” he said. A lot of important countries will sign the agreement.

The world’s top exporter of palm oil, which can be found in everything from shampoo to cookies, is Indonesia.

Meanwhile, Russia’s vast natural forests, which account for more than a fifth of the world’s trees, trap about 1.5 billion tonnes of carbon each year.

Under Brazilian President Jair Bolsonaro, deforestation in the world’s largest rainforest, the Amazon, surged to a 12-year high in 2020. “Having Brazil signing the deal is really important because it holds a large chunk of tropical forests.

But the money must be channelled to people who can make this work on the ground,” Ms Yang said.

Many people in the Amazon, particularly those living in cities, rely on the forest for their lives, and they require assistance in finding alternative sources of income, she added.

In a warming planet, trees are one of our most important defenses. They operate as carbon sinks, sucking carbon dioxide from the atmosphere.

They absorb around a third of the CO2 emitted globally each year.

Every minute, an area of forest the size of 27 football fields is lost.

Forests that have been depleted may begin to leak CO2. Scientists are concerned that if too many trees are taken down, the earth would approach a tipping point, resulting in dramatic and unforeseen climate change.

On the second day of the two-week climate conference, the United States and the European Union will also launch an initiative aimed at driving global efforts to reduce methane emissions, a greenhouse gas produced by sources such as fossil fuel extraction and livestock production.

Hundreds of heads of state will sign the commitment, which commits countries to reducing carbon emissions by 30% by 2030.

India pledged to lower its greenhouse gas emissions to net zero by 2070 on the first day of the conference in Glasgow, falling short of a major objective set by the COP26 summit for countries to commit to achieving that goal by 2050.

Among those to address the summit was the Queen, who urged world leaders in a video message to act “for our children and our children’s children” and to “rise above the politics of the moment”.