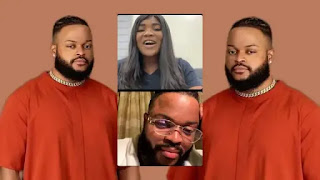 Hazel Oyeze Onou, professionally known as Whitemoney, the winner of Big Brother Naija Season 6 and reality television personality, has revealed what his father said when he found out he had won the show.

Recall that during the Shine Ya Eye show, Whitemoney said that his dad separated from his mom years ago, leaving him and his brothers somewhat fatherless, because their mom was the only one who catered for them.

Whitemoney also mentioned that even though his mom hasn’t gotten married to another man since then, he planned to go searching for his dad after the show. And when he finally sees him, he would ask him to come back to his mother.

So, the show is over, and it seems Whitemoney’s dad was aware of what he said in the Big Brother House. So, he tried to reach out to his family.

According to Whitemoney, in a recent interview with La Mode magazine, his father reached out to his mom, and gave his phone numbers to her, which they can use to contact him.

The BBNaija winner, added that there’s something his father told his mom the day he called her after the Shine Ya Eye show. And according to him, his father said he’s happy that he (Whitemoney) didn’t go to school, because if he had gone to school, he would have been carrying files around Abuja, searching for job, and wouldn’t have the opportunity to win the show.

Whitemoney, who was surprised this came from his dad, also revealed that his dad is one of those parents who would force their children to be lawyer, or doctor, like his own dad forced him to study law.

“And one day, my mom called me and said my dad reached out, to her and he dropped his phone numbers.
“And there’s what he said that really cracked me up, because my dad is one of those parents that if you’re not a lawyer, doctor, or this, you’re useless.

“He tried for my brother to be a doctor, that one ended up with computer. He tried for me to be a lawyer, imagine me, be a lawyer, I will probably be doing charge and bail. I will just be collecting money to shout my lord, my lord, yes Lord, Amen lord. Me that my parents aren’t strong that side.

“So, my point is this. This is what he said with his mouth. He said, and I quote, according to what my mother told me, that my dad said, ‘Thank God that I did not go to school, thank God he was not there to send me to school, if not, how would I have won this Big Brother. That if I had gone to school, I would have been carrying files around Abuja, looking for job’.

“Look at what this man is saying. That’s why I told you, speak all the English you want to speak in this world, If you don’t have money, you’re nothing.”