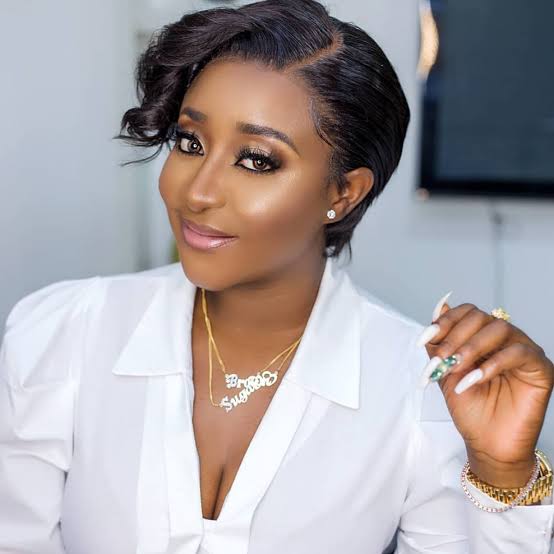 I Am Expecting A Child Through Surrogacy- Ini Edo Says

Ini Edo, an actress, has verified rumors that she is expecting a child through surrogacy.

Touchaheart Nigeria reports that however, she disputed rumors that her baby’s father is a married guy.

On Friday, the actress divulged these details in an exclusive conversation with blogger Stella Dimor Korkus, which she shared on her Instagram page.

The child is genetically her, according to Ini Edo, because the baby was made using her eggs rather than the surrogate mother’s.

“Wow! Here we go, Stella. Yes, I do have a daughter and I had her through surrogacy. The eggs are mine and so genetically she’s my blood.

“I chose this path to fulfil my dream of becoming a mother. I still have a good number of eggs frozen in case I decide to do surrogacy again or carry my baby myself, who knows?”

She also revealed her daughter will be one in a few months and was hoping to break the news herself but ‘mischief’ makers beat her to it.

“I was not, I was hoping to talk about her on her 1st birthday in a few months but mischief-makers beat me to it and spoilt the beautiful story with lies,” she said.

Speaking about the baby’s daddy, the movie star explained she opted for a sperm donor for peace of mind.

More importantly, she said it was to avoid public controversies over custody of the child.

“I opted for a donor for me and my baby’s peace of mind. Another major reason I opted for a donor is that it scares me so much when I see banter and controversies between a mother and a father over a baby in public forums or when I see the man insisting he wants his child if things don’t work out between both parties,”

Rumors that her child’s father is a married man named Kome have been dispelled by the 39-year-old actress.

She claimed that anyone spreading such rumors is spreading lies from the depths of hell because she is only acquaintances with the married man in question.

“The sad thing about this is dragging an innocent man into something that has absolutely nothing to do with him.

“Stella, I naturally make friends better with guys than women. I do have a few female friends don’t get me wrong but I relate better with people who are older and way more experienced in life than I am.

“I relate with People who bring real value to my life .how many people can one possibly date? I have loads of Male friends, most of them, I am friends with their entire family including wives.

“It is so sad that in Nigeria when a ‘single’ woman is friends with a guy, it must mean to people that they are dating. I mean make it make sense, Kome has been my friend for years and that’s what it is, period.

“He is a responsible family man and doesn’t deserve to be dragged into my motherhood story…… Anyone saying that he is the father of my daughter is a lie from the pit of hell.”