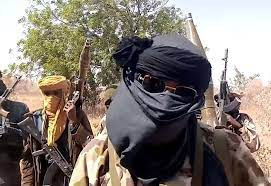 In Zaria, Five People Were Kidnapped By Bandits

Bandits have kidnapped five individuals in the Dutsen Abba and Kasuwar Da’a regions of Zaria Local Government Area in Kaduna State, according to DailyTrust.

Touchaheart Nigeria reports that this comes just 24 hours after bandits barricaded the Kaduna-Zaria road, killing three persons and kidnapping a large number of others.

The Kaduna State Police Command has yet to respond to reports of the attack on the two communities, but residents claim that the bandits stormed Dallatu village around 1 a.m. today, December 15, kidnapped two people and then proceeded to Kasuwar Da’a village, where they abducted six more people, including three children.

The three youngsters were released on Wednesday morning, December 15, leaving five persons in captivity, according to reports.