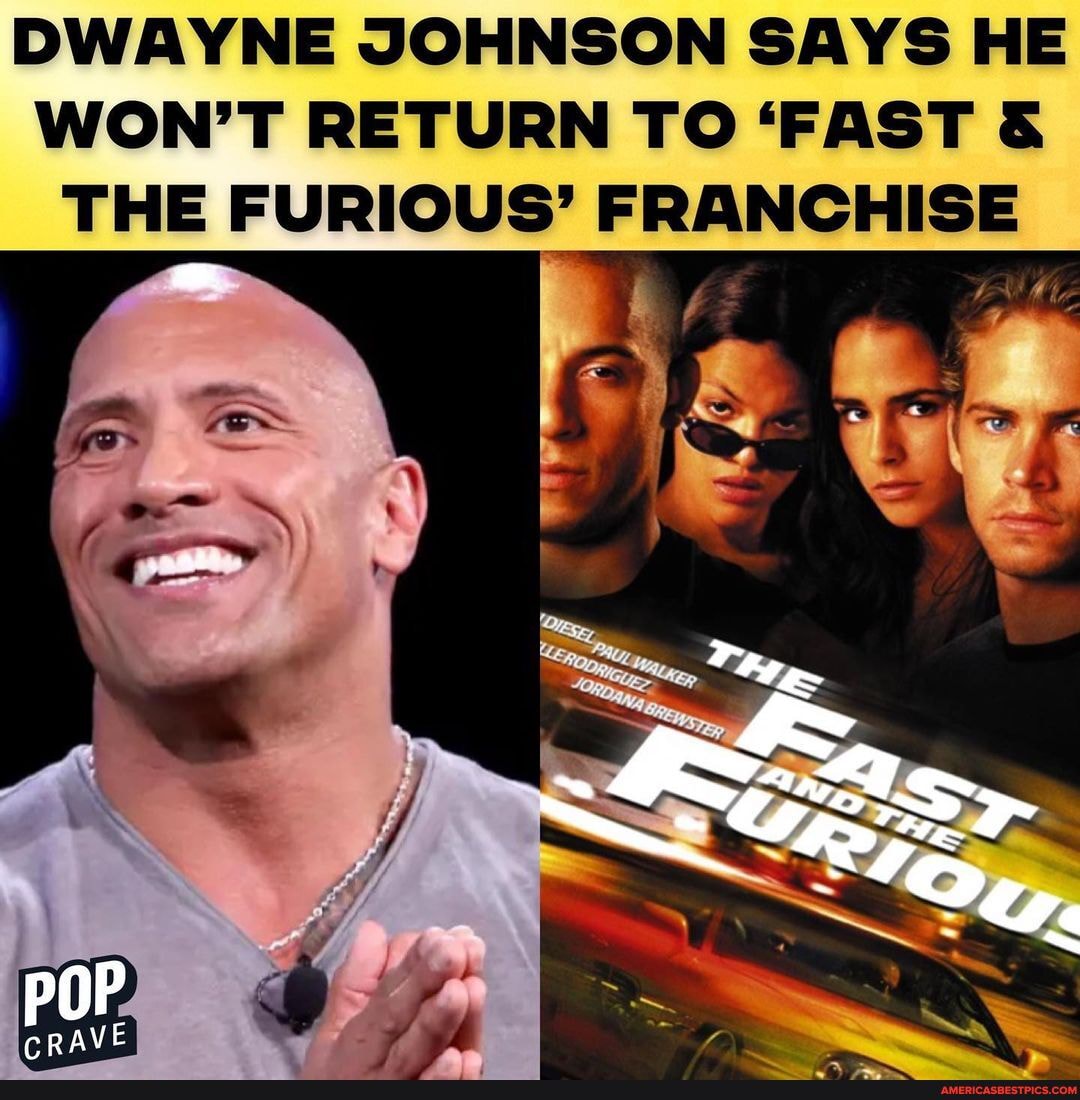 Dwayne Johnson Says He Won’t Return To Fast and Furious

Dwayne Johnson, who played “Luke Hobbs” in the Fast & Furious trilogy, has said that he will not be returning for the saga’s conclusion.

Touchaheart Nigeria reports that In an interview with CNN, Dwayne Johnson slammed his co-star Vin Diesel’s cynical attempt to get him to return to the set despite his refusal.

Diesel publicly pleaded with Dwayne to return, citing his children’s friendly relationship with the former wrestler.

“My little brother Dwayne… the time has come. The world awaits the finale of Fast 10. As you know, my children refer to you as Uncle Dwayne in my house. There is not a holiday that goes by that they and you don’t send well wishes… but the time has come. Legacy awaits.”

He added “I told you years ago that I was going to fulfill my promise to Pablo. I swore that we would reach and manifest the best Fast in the finale that is 10!

“I say this out of love… but you must show up, do not leave the franchise idle you have a very important role to play. Hobbs can’t be played by no other. I hope that you rise to the occasion and fulfill your destiny.”

However, the public plea angered Dwayne who described the move as “an example of his (Diesel) manipulation”.

He said he had told Diesel behind closed doors he could no longer continue acting and was shocked by his public outburst.

“I was very surprised by Vin’s recent post. This past June, when Vin and I actually connected not over social media, I told him directly — and privately — that I would not be returning to the franchise.

“I was firm yet cordial with my words and said that I would always be supportive of the c ast and always root for the franchise to be successful, but that there was no chance I would return. I privately spoke with my partners at Universal as well, all of whom were very supportive as they understand the problem,” Dwayne told the outlet.

“I didn’t like that he brought up his children in the post, as well as Paul Walker’s death. Leave them out of it.

“We had spoken months ago about this and came to a clear understanding. My goal all along was to end my amazing journey with this incredible Fast & Furious franchise with gratitude and grace,” Dwayne said.

“It’s unfortunate that this public dialogue has muddied the waters. Regardless, I’m confident in the Fast universe and its ability to consistently deliver for the audience, and I truly wish my former co-stars and crew members the best of luck and success in the next chapter,” he added.

Meanwhile, Diesel claimed that their feud was sparked by his “tough love” while serving as a producer on the set of the film. He acknowledged to being rough on the actor in order to get the best out of him.

I could give a lot of “tough love,” Diesel stated in an interview with Men’s Health in July. Not quite Felliniesque, but I’d go to any length to obtain performances in any project I’m working on.

“It was a tough character to embody, the Hobbs character. My approach at the time was a lot of tough love to assist in getting that performance where it needed to be.

“As a producer to say, ‘Okay, we’re going to take Dwayne Johnson, who’s associated with wrestling, and we’re going to force this cinematic world, audience members, to regard his character as someone that they don’t know.’”

Dwayne Johnson, who first appeared in the Fast and Furious franchise in 2011 as Luke Hobbs, has since appeared in the sixth, seventh, and eighth installments. Fans are hoping that Dwayne Johnson’s departure will not delay the release of Fast & Furious 10, which is scheduled for May 19, 2023.