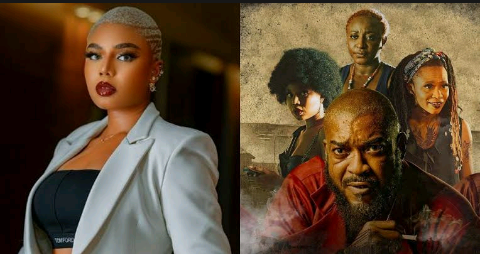 Touchaheart Nigeria reports that Nollywood actress Nancy Isime, who recently made headlines on social media for her nude scene, has revealed how the scene came to be.

Online discussion on whether or not the actress is indeed nude in that scene has been sparked, with others criticizing the scene as needless.

The scene, which has garnered a lot of public interest, shows a subtle and private exchange between Isime’s character and that of renowned actor Richard Mofe-Damijo.

Isime responded to the chat by admitting that a body double had been used in place of her to display her nude in the scenario.

A body double is someone who fills in for an actor in a scene, typically for shots that focus on the actor’s entire body or a particular body part, like the back, legs, or chest.

Body doubles are frequently utilized in the film industry for scenes involving nudity, closeness, or physical action that would be risky or difficult for the actor to perform.

Touchaheart Nigeria reports that William Troost-Ekong, a defender for the Super Eagles, has revealed he has left Watford and is on his way...