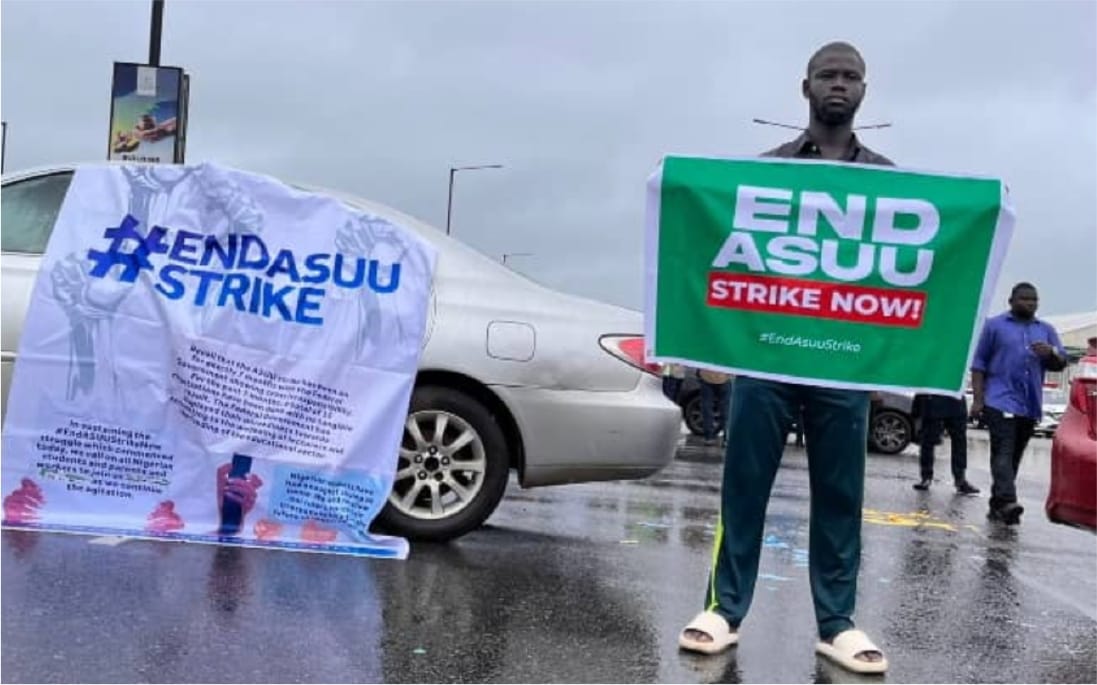 The Academic Staff Union of Universities, or ASUU, has been on strike for over seven months. Yesterday, the National Association of Nigerian Students, NANS, suspended operations at the nation’s primary entry point, the Murtala Muhammad Airport, in Ikeja, in protest.

The student body also promised to continue the demonstration today at the Third Mainland Bridge, Tin Can Island, and Apapa Wharf ports.

ASUU embarked on strike on February 14 to protest the Federal Government’s failure to meet the demands of its members, among which implementation of the agreement it signed with the government in 2009 on Earned Allowances and replacement of Integrated Payroll and Personnel Information System, IPPIS, and University Transparency and Accountability Solution, UTAS.

Not even the early morning downpour stopped the students from trooping out for the protest as early as 6 am, as they set out to stop all flights out of Lagos, especially the first flights.

Consequently, all access roads to both local and international wings of the airport were blocked by motorists, causing serious traffic gridlocks, which compelled passengers to trek kilometers with their luggage to connect their flights.
Touts took advantage of the situation to make brisk business, charging passengers as much as between N2,000 and N3,000 to convey passengers’ luggage to the terminals of the airport.

Due to the blockade, some bedridden passengers were spotted being pushed in wheelchairs to the terminal.

Oyetunji Sanusi, a stranded commuter and employee of the Federal Government, claimed that he became stopped in traffic on the way to work around 8:30 a.m.

“I have suffered today (yesterday). This is 2:30 pm and I am still here. The agitation is worth it but the hardship it has caused is unimaginable. My appeal to the government is that they should find a lasting solution to this issue.’’

Another very angry commuter, Francis Phillips, said he had been to 88 countries of the world, adding that Nigeria remained the worst.

“Even the spoon we use to eat here is sub-standard. I am stranded here and my wife is stranded at the local airport. Even in Somalia, it doesn’t happen like this. It is a shame,” he said.

He added that everyone had the right to protest but regretted that those who should be targeted were not affected by the protests.

“They are busy sharing money because they don’t know their right from their left,” he said.

Also, a sick commuter who said his house was just about five minutes from the airport, said he needed to pass to access his drugs.

He said: “I have been here since 7 am and my car is parked somewhere there. I need to get home to take my drugs and eat but I am afraid to leave my car here.”

Although the police had on Sunday, warned the students to steer clear of the airport to stave off confrontation from operatives, they however, provided security cover for the protesting students and even pleaded with them to stop action which they refused.

They were conveyed to the airport axis in over 20 vans, and cars to prevent the protest from being hijacked by hoodlums.

Addressing the students, the Deputy Commissioner of Police, Airport Road, Kayode Sunday, said: “This issue has been on for a long time. We have been pleading with them and the police command is supporting us.

“All the security agents in Nigeria are working together to talk to the students to sheathe their swords. Nobody is happy they are at home for months. However, we want them to free the road.

“Although they have created a corridor where vehicles can move, we are managing them and they are cooperating with us.

“The protest is peaceful and we also have not allowed hoodlums to hijack the protest but we believe and the students have promised us that at 2 pm, they will vacate the corridor. This is an international corridor and we need to secure the premises.”

Until ASUU strike is called off, we won’t quit airport — NANS

Opeoluwa Awoyinfa, a spokesman for NANS’ South West zone, informed reporters that the airport would remain under siege until ASUU ended its strike and resumed work.

Awoyinfa expressed regret that President Muhammadu Buhari and Lagos State Governor Babajide Sanwo-Olu chose to leave the country while university students were still at home as a result of the strike, and that the protest would be extended to the Third Mainland Bridge and the two ports in Lagos today.

“We want the international bodies too to see the shame that is going on in our education sector, so they can also help us to beg our government to listen to us.

“Campaigns for the 2023 elections will begin on September 28, 2022, so if the students keep quiet, the federal government will only focus on elections. Any country that wants to develop must invest in education. The federal government must do the needful so that the strike will be called off. Our future is wasting, the pandemic already took a year from us and now we are going to be having about three sets of 100-level students by December.

In a related development, today’s meeting between the House leadership and representatives from the academic community, including the Academic Staff Union of Universities, or ASUU, will take place.

The meeting was announced in a letter that the speaker, Femi Gbajabiamila, and the clerk of the House, Dr. Yahaya Danzaria, sent to Minister of Education Adamu Adamu and made available to journalists in Abuja yesterday.

His letter read in part: “Speaker, House of Representatives, Femi Gbajabiamila, hereby invites you to a Stakeholders meeting towards finding a lasting solution to the lingering strike embarked upon by the Academic Staff Union of Universities, ASUU.

“In the light of the foregoing, the House hereby requests for another opportunity to come together with stakeholders and leadership of ASUU to seek an amicable resolution without prejudice to the fact that the matter is already in the Industrial Court.

“You are further required to submit a written presentation of ASUU’s perspective on this matter to the House before the meeting day. While looking forward to your esteemed presence, please accept the assurances of the highest consideration of the speaker.”

Also yesterday, the Federal Government filed an application for an interlocutory order to compel the Academic Staff Union of Universities, ASUU, to end its ongoing strike action. The National Industrial Court, NIC, sitting in Abuja, is scheduled to rule on this application tomorrow.

When the case was resumed on Monday, Igwe, the attorney for FG, asked the court to order the striking varsity lecturers to return to the classroom in the interim while the lawsuit was being decided.

He maintained that the matter was not only urgent, but of great national interest as millions of students have been at home since February 14.

“Sections 47 of the Trade Dispute Act gives your lordship the power to direct that no worker should continue to embark on strike pending when the applications are heard and determined”, he argued. Igwe said there was a need for the matter to be expeditiously determined to enable university students to return to school.

According to him, since the dispute between FG and lectures is already before the court for adjudication, it would be proper and in the interest of justice for the strike action to be called off.

On his part, ASUU’s lawyer, Mr. Falana, SAN, said the union was currently meeting with stakeholders to ensure an amicable resolution of all the thorny issues.

Falana, therefore, appealed to the government to cooperate with the union to resolve the issue.

Meanwhile, the administration of Imo State University, IMSU, stated that it has opened the university for academic operations and withdrew from the over seven-month strike that ASUU had initiated.

In a statement, Ralph Njoku, the institution’s PRO, said the decision was made by management to stop the university from receiving so many students who wanted to attend classes, particularly candidates who had not yet been matriculated.

He clarified that the decision was made to avoid undervaluing the next generation even if the school has no problem with ASUU.